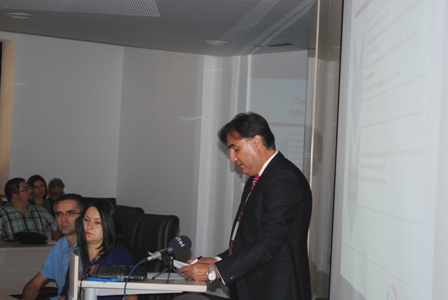 Skopje, 18.09.2015 – The Agency for Audio and Audiovisual Media Services held its third public meeting in 2015, in accordance with the Law on Audio and Audiovisual Media Services. The Director of the Agency, Mr. Zoran Trajchevski, Ph.D., spoke about the implementation of the AAAVMS’ Annual Work Plan, explaining in detail the realized activities: the supervisions conducted over the broadcasters, operators of public electronic communications networks and print media, and the pronounced measures; the assignment of new television broadcasting licenses at the regional level; the prepared Analysis of the market of audio and audiovisual media services in 2014; the Research conducted into the radio stations’ reach and the viewership share of television stations broadcasting programme at the state level via satellite or public electronic communications networks and television stations broadcasting programme at the regional and local levels in the second quarter (Q2); the activities carried out for implementing the 2013-2017 Strategy for the Development of Broadcasting Activity, as well as the activities in the field of European and international cooperation.

Ms. Emilija Janevska, Head of the Programme Affairs Sector in the AAAVMS, spoke about the importance of media literacy, the context for its development, the goals set by the Agency’s Media Literacy Programme for raising the awareness, facilitating the participation and coordinating the activities related to media literacy. In the continuation, a TV spot was launched about Internet safety, titled “Where is Goran?”. This is an adaptation of the spot “Wo ist Klaus?” (“Where is Klaus?”) by the German organization klicksafe.de, the translation of which was done by employees of the Agency. The synchronization and the subtitling was prepared by TV Sitel, which, as its representative Ms. Aneta Veterova-Shoshkic said, was motivated to get involved in this entire process owing to their awareness of the need to protect children when surfing the Internet. 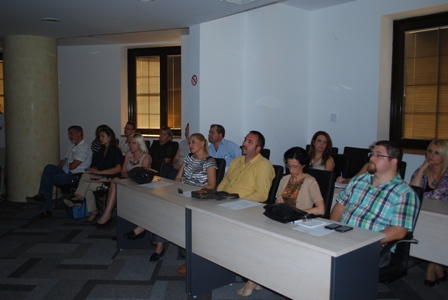 The spot drew attention again to the “Surf Safely” Project of the Ministry of Information Society and Administration, within the frameworks of which software had been prepared for parental control over the Internet contents accessed by children. As the representative of the Agency for Electronic Communication, Mr. Sinisha Apostolovski, pointed out, the focus of this project was on understanding the risks and dangers lurking on the Internet, which threaten children and youth, as well as on the recommendations for their timely recognition.

A presentation on the obligation to broadcast originally created programme and the manner of conducting supervision was held by Mr. Rubin Taleski, Senior Associate in the Cultural Identity Division, followed by a discussion about the most frequent problems that broadcasters encounter in fulfilling this obligation of the law.

At the end of the meeting, the Director Trajchevski underlined that the Agency was open for cooperation and called on all broadcasters, print media and operators of public communication networks, as well as all other concerned parties, to submit their opinions or proposals on topics of interest for the entire public, which would be presented at some of the future public meetings.

The presentations can be downloaded at the following links:

Programme for Promoting Media Literacy in the Republic of Macedonia