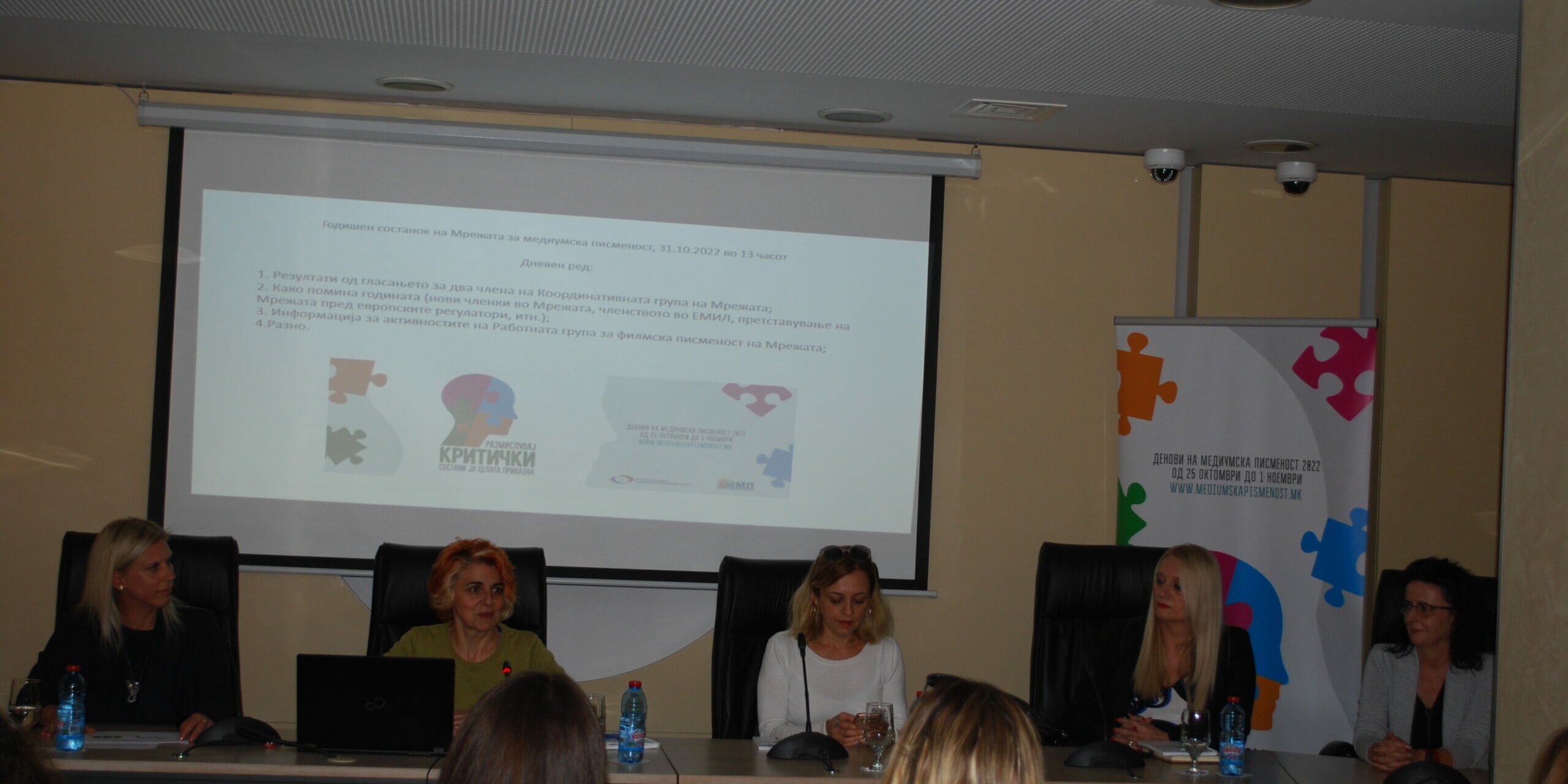 This past Monday (31 October 2022, at 13:00 hrs), the Media Literacy Network held a meeting at the premises of the Agency for Audio and Audiovisual Media Services.

The meeting was convened with the following agenda:

The Network coordinator Emilija Petreska-Kamenjarova was the moderator of the meeting. Under the first topic on the Agenda, she stated that Vesna Nikodinoska and Olga Samardjic-Jankova’s two-year terms had expired, and presented the results of the online votе for the election of two members to the Coordination Group of the Network, held through the Google Forms platform from 21 to 26 October 2022. The voting had been conducted in a way that each member of the Network could cast one vote for one of the three nominated candidates, Vesna Nikodinoska, Bojan Shashevski and Kujtim Kasami, respectively. Bojan Shashevski was elected as a new member of the Coordination Group, while Vesna Nikodinoska was re-elected for another, 2-year mandate.

With the aim of informing the present about the work of the Network throughout the past year, and also about its international activities, Emilia Petreska-Kamenjarova gave the presentation that had originally been designed for the EMIL meeting, at which the work of the Media Literacy Network had been presented before the European regulators. In this, she noted that the country was one of the first in Europe to have formed this kind of a Network, by including various stakeholders in its society that can contribute to this sphere. She emphasized that this had been recognized by the European media regulatory bodies and that our experiences in this type of networking were useful to a number of European countries. The presentation also served to evoke the past events that had been held as part of the Media Literacy Days in 2019, 2020 and 2021 and the Network’s progress throughout this period of time.

The Media Literacy Network had 78 members at the time of the meeting, the Media Information Agency (MIA) being the latest to join. Last year, a new, fourth, working group was formed, in charge of film literacy, and it has been coordinated by Daniela Stankovska-Plachkovska of the Film Agency. The activation of the Film Literacy Group was the impetus for including a special movie programme within the 2022 MLD Agenda this year. At the meeting, Daniela Stankovska-Plachkovska shared her experience from working within the Film Literacy Working Group, as well as details about the organization and the course of the movie screenings, and the discussion that followed the screenings. She highlighted in particular the benefits of the Film Agency’ engagement within the Network and its participation in the Media Literacy Days with the special movie programme, which has made significant contribution to building the movie theatres’ awareness about inclusivity, and has posed an initiative for ensuring capacities and accessibility for people with disabilities at some future screenings.

In the open discussion, the members of the Media Literacy Network expressed their opinions on how to improve the work of the Network and how to make it more visible to the public, which is not very familiar with it. The media expert and professor at MIM, Marina Tuneva, and the MIM project coordinator Vesna Nikodinovska, as members of the Coordination Group of the Network, emphasized the importance of raising the level of media literacy of all citizens and the need for more frequent cooperation among the relevant stakeholders. The new member of the Coordination Group, Bojan Shashevski, proposed to consider the idea that ​​the Network open a profile on TikTok, a social network that is very popular among the young population, as the format of 20-second videos may be interesting for creating media literacy content. Also discussed was the importance of fighting disinformation and fake news on the social networks and online portals, and what actions the members could take to tackle this problem. The need was underlined for cooperation among the four working groups of the Network, as well as for defining sooner the main theme of the next Days of Media Literacy.

The attendees and the media, associations and organizations’ representatives expressed their commitment to further selfless mutual cooperation, a more frequent use of the Network for communication and consultations among the various entities in the country that work on raising the level of media literacy of all citizens, and to sharing resources, such as publications, survey results, infographics, teaching materials related to media literacy in Macedonian, Albanian or English, so that these could be published on the website www.mediumskapismenost.mk and be made available to the general public.