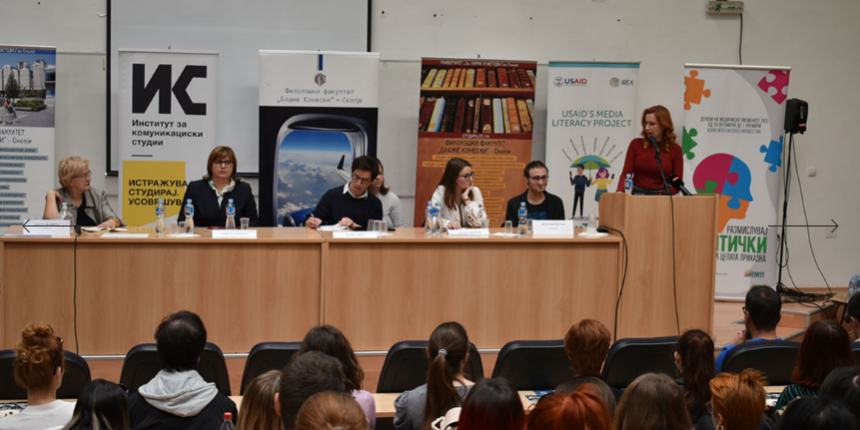 The panel discussion on “Media Literacy and the Students” is the first public event that the “Blazhe Koneski Faculty of Philology, ICS and IREX have organized within the project on “Introducing Media Literacy to the Future Philologists,” with the support of the “YouThink” programme of the American Agency for International Development (USAID).

Vice Dean for Science and International Cooperation Prof. Dr. Maja Bojadzievska, who opened the event, said that, in the past, “through the fundamental knowledge of languages ​​and cultures, we were all building our ethos, our concepts of truth and lies and our concepts of authority and responsibility. If, in my time, distinguishing truth from falsehood was important for ethical reasons, nowadays it is important, in the literal sense, for existential reasons.”

The Head of the Project, Assoc. Dr. Christina N. Nikolovska added that it would be useful for all students to gain knowledge about how traditional media worked, how messages were created and distributed, and how to understand the narratives that were coming to us from all sides. She emphasized that the subject of media literacy would be useful to every student, but especially for those who, after completing their studies, would seek professional engagement in the media or in teaching their native languages.

“Ever since 2000, the contents of media literacy, in various forms of manifestation and naming, (media culture, expression and creation, media literacy) have been represented in the mother tongue curricula for primary education. The introduction of the subject Media Literacy in the curricula of the study programmes of the “Blazhe Koneski” Faculty of Philology in Skopje would contribute to upgrading the studies with a new quality, which would improve the preparation of the future language and literature teachers in the spheres of primary and secondary education,” said Gordana Aleksova, associate professor at the Macedonian Language Department and participant in the panel discussion.

Blake Smith, professor from the University of Chicago, also spoke at the panel, addressing the problem of fake news in the United States throughout history. “No one should think that media literacy is a problem that we Americans think we have solved, or that we think that we can teach people from the other countries how to deal with this complex phenomenon. The political developments in recent years have shown very clearly that our attitude towards the media in the USA is problematic, and that is probably why Americans are so interested in this topic and in media literacy,” he said.

Saranda Mehmedi, a student at the Faculty of Philology, a poet and a poetry translator, referred to disinformation that had been published about the refugees in the past years and pointed out that, when messages are constructed creatively (through comics as an art form), they can touch audience profoundly, especially the youth, and thus contribute to changing the perceptions and stereotypes about the vulnerable groups.

As the panel took place as part of the 2022 Media Literacy Days (25 October – 1 November), which, this year, the Media Literacy Network dedicated to media literacy and diversity, several speakers discussed how to facilitate access to information for the vulnerable groups of citizens. Kristijan Lazarev, a student of the Faculty of Philology who, together with Professor Branislav Gerazov of FEIT, works on improving access to information for the visually-impaired, emphasized that the problem was not in the vulnerable groups of citizens, but in the fact that society was not yet ready to follow and implement the EU recommendations regarding access to media content. Gerazov added that software and hardware solutions should be used increasingly, as they can facilitate access to information for the vulnerable groups and that one should work on overcoming the challenges. “Media can help with the accessibility, but they themselves should have the insight to organize their content so that these be as accessible as possible. We work with radio or television footage and there are sentences that last 40 seconds. There is no need for this, as it can all be said in a shorter manner and thus be more accessible not only for people with disabilities, but for everyone. For example, texts can be made with fonts for people who have dyslexia. There are also technologies for text aversion that could provide automatic subtitling of video content,” noted Gerazov.

Bojan Shashevski, a MOF Radio journalist continued the discussion by stressing, “Our role is bigger than what the daily journalism shows. If on December 3 – the World Day of Persons with Disabilities – I publish only one news item about it, am I fulfilling my duty towards the public? These are questions that we keep asking ourselves,” he said.

Victoria Volak, a sign language interpreter, indicated that the pressure on her as an interpreter from the community of visually impaired at the height of the pandemic was crucial and that it was during that crisis that the public recognized the need for important news to be made available to these people as well. “Before the pandemic,” said Volak, “we were not given space within the frame at the events where we were invited to interpret in sign language. But the public reacted positively when we started appearing at the press conferences of former Minister of Health, Venko Filipche.”

The “Blazhe Koneski” Faculty of Philology in Skopje was chosen at the beginning of June, along with three other higher-education institutions, to introduce media literacy into the curricula. Within the frameworks of the project, it is planned to publish a collection of works translated by the students of English, to prepare a media literacy manual and to organize a workshop and a public lecture dedicated to the mechanisms of conducting propaganda throughout history.