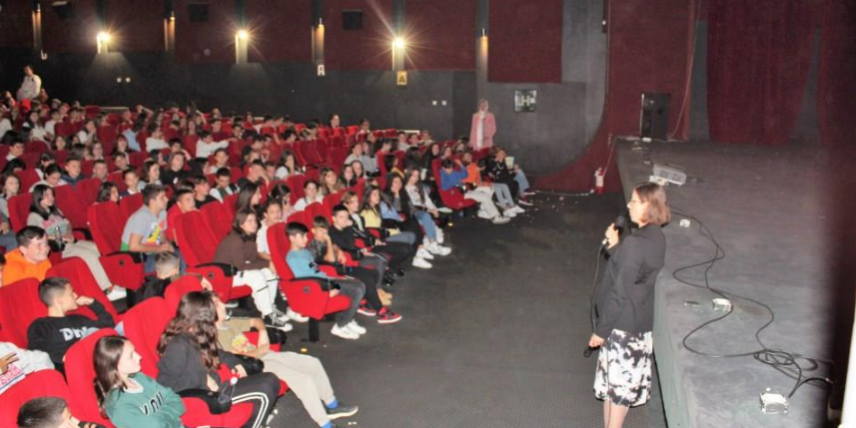 MOVIES influence children and young people in a cultural, creative and critical way! A total of 2,139 students from 20 schools around Skopje joined in the activity that was successfully carried out – the free screening of thematic films for children from the elementary schools (6th to 9th graders).

There were eight movie screenings in three movie theatres: Millennium Cinema, Cineplexx, and the Cinematheque, of the following three European themed films:

– The Danish movie “Hacker,” directed by Poul Berg, and

The three European movies were an excellent resource for the students, both as art and as a didactic aid, for encouraging and challenging them to think, raise their awareness and discuss the topic of the specific movie that they watched together with their peers in a cinema theatre on the big movie screen.

At 6 screenings out of a total of 8, the students had the opportunity, after watching the films, to discuss three important topics – life with a person with a disability (Down’s syndrome), prejudices, bullying, technologies, video games – with the psychologists:

– Ivan Hristov, who covered two topics: life with a person with a disability (Down’s syndrome), prejudices and bullying

– Maja Cvetanovska, a psychologist and researcher, on the topic of life with a person with a disability (Down’s syndrome), prejudices

– Elena Petrovska, a psychologist, on the topic of technologies, video games

– Ana Blazheva, a psychologist and psychotherapist, on the topic of bullying

The Media Literacy Network would like to thank the psychologists who managed, through conversations with the students, to move them, challenge them, and also make them face specific and important topics. It also wishes to express its gratitude to the supporters: the Film Agency, Millennium Cinema, Cineplexx, the Cinematheque of RNM, and the Cutaway distributer, who made possible the transformation of an idea into a cultural, critical and creative experience for the elementary school students.

The Media Literacy Network’s Film Literacy Working Group continues its efforts to include the film as an art form with a universally understandable code, and film literacy as a form of literacy within the formal education (both primary and secondary).

We are continuing the activities aimed at the schools, so that film becomes part of the formal curricula programmes as a separate aesthetic entity and as a didactic aid. Take a look at today’s atmosphere (01.11.2022) and the crowded hall of Millennium Cinema, where 457 students from the “Kuzman Shapkarev,” “Aleksandar Makedonski,” “Nevena Georgieva Dunja” and “Congressi i Manastirit” elementary schools watched the movie “Checkered Ninja”.